UMAIA > Articles > Hindus are not kafir

In every religion, there are interpreters that take a liberal and pluralistic view as well as those that take a non-inclusive view.

Living in India for 22 years has taught me there are several sects and several interpretations to Holy Scriptures. I am raised in a very pluralistic thinking household hence I have never considered a person of any other faith as Kafir or non-believer.

Going to a Catholic missionary school in Mumbai, India I learned Jesus’s saying: Do not Judge others lest you not be Judged.

In 1965 I moved to Karachi, Pakistan to find a job and I ended up living in Pakistan for four years. There the interpretation of Quran and Hadith were more on excluding people of other faiths. The only right religion is Islam and Muslims are the only chosen people to spread that message to other religious groups. I cannot agree with those non-exclusive thoughts and ideas.

In 1969 I moved to San Francisco, USA and ended up obtaining American citizenship. I have been living in the USA for the last 53 years. During the last 42 years I have been involved in politics and the interfaith movement in the San Francisco Bay Area.

The digital connections to the whole world are creating great changes and reforms and American Muslims are in unique position to bring changes locally, nationally and globally in the Muslim world. 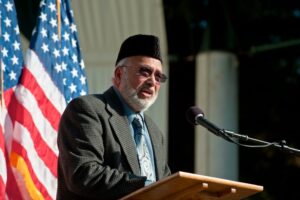 Iftekhar Hai: Hindus are also people of the book

The Quran is very clear in explaining the definition of the word Islam. The uniqueness of this word is that it is not named after any person (in this case our Prophet). It means total surrender or submission to the Creator of all humanity. Surrender and submission is core principal in every spiritual traditions.

The Quran says that the religion (Islam) of all the Prophets is submission and surrender to the One Supreme Creator.

There are numerous ways of submission and surrender with the core principles always remaining the same in all the religions. For example, Muslims five pillars of Islam are found in all the religions that is: belief in One Creator, prayer, fasting, charity and pilgrimage.

The following Quranic verse proves that Islam was the religion even before Prophet Mohammed (pbuh) was born; as is evidenced in Surah 42:13:

“The same religion has He established for you that which He enjoined on Noah. That which We have send as inspiration to you (Mohammed pbuh) and that which We enjoined on Abraham, Moses and Jesus (Buddhism, Hinduism and other paths are also included that existed before the coming of Prophet Mohammed) that you should stay steadfast in religion (submission/surrender to our Lord) and make no divisions therein. (This means work for the unity of humankind) As for those who worship other things than God (meaning – money, power, idols, humans, etc.), they are on a difficult and wrong way (hard) to call from. God chooses to Himself those whom He wills and guides those people who turn towards Him.”

According to above, if a Christian, a Jew or any believer from Buddhism or Hinduism surrenders to One Supreme Being, they are falling within the definition of the word Islam which means total surrender or submission. The art of surrender or submission is called Islam. This art of submission/surrender was shown to all the Prophets and their people as evidenced in the Quran 10:47, 14:4 and 16:36 which says, “To every people we send an Apostle in their own language and in their own country to clarify.”

Islam is very inclusive and broad in its definition. Muslims believe in Allah (God) and take Mohammed (pbuh) as their respective messengers.

Likewise, the Buddhists and Hindus also have been blessed with their Apostles (gurus or learned people). Muslims believe in the Holy people coming from all the major and minor religious sects with the same core message.

Muslim scholars strongly recommend not to judge believers from other faiths. The depth of surrendering or submission of other believers is known only to God who is All Knowing and full of perfect Wisdom. God is THE ONLY JUDGE fully capable of passing judgments. Here Jesus advice is more relevant, “Do not Judge others lest you not be judged.”

Surah 3:85, “If anyone desires a religion other than Islam, never will it be accepted of him.” Here the definition of the word Islam must be taken in its inter-religious and global context as explained above.

What is Kafir or Infidels?

The word Kafir is derived from the Arabic root word KFR, (Kaf, Fay and Ray) which means to cover, conceal or hide. What is more important is the intentional misleading, deceiving or suppressing the truth. Meddling with the Holy Scriptures where intentionally truth is either concealed, changed, omitted, misinterpreted so that people either begin to doubt or lose complete faith in God, His Signs and His Revelations–this can come in the area of infidelity (being unfaithful to your Creator) or Kufr.

Character assassinations of Biblical and Quranic Prophets, done intentionally to undermine the faith or trust/believe in God, His Signs and Revelations can also be classified, as Kufr and people committing such acts are called Kafirs or infidels.

One cannot call a believer in God from other faiths as Kafir if they do not believe in Prophet Mohammed (pbuh) as Messenger of God and the Quran as final revelation.

In modern language, you can say, it must be intentional dishonesty, deception and misinformation. Just like a more sophisticated, premeditated perjury is deep rooted in intentionally misleading or deceiving people which can lead to criminal actions. We have to consider the extent of intentional deception or perjury in explaining Kafir or Kufr.

Infidel does not really represent the true meaning of the word Kafir. The dictionary merely says an infidel is one who does not belief in any religion, like Christianity and Islam.

Hindus, Buddhists, Jains and Sikhs (Dharmic faiths), who comprise 25% of the world’s population, cannot be classified as non-believers or as kafir. They believe in God, the Last Day or life after death and believe in doing righteous deeds.

Dharmics have also been shown the art of surrender, submission or devotion (which in Arabic is called Islam and in Sanskrit as Bhakti).

Hence believers in One God from other faiths cannot be lumped or stereotyped as non-believers. No one has the authority to judge others. Hence, all Dharmic cannot automatically be called kafirs/Infidels.

The Quran uses Kafir in reference to the pagan Arabs who had unleashed war on Prophet Mohammed and early Muslims. All the verses on war in the Quran must be taken in reference to the pagan and idolatrous Arabs. Muslims look towards war in the Quran to stop tyranny and oppression of the pagan Qureshi tribe. The other side of war was to establish freedom, liberty, women rights and a better law-abiding society.

Christians and Jews who lived during the times of Prophet Mohammed were never defined as Kafirs or infidels. They are called “People of the Book” throughout the Quran. Prophet Mohammed included them as part of the Medina Constitution where their places of

worship were protected and respected. This is a very important observation that we all should know.

Hence believers in One God from other faiths cannot be lumped or stereotyped as non-believers. No one has the authority to judge others. Hence, Hindus cannot be called Kafirs because they also have been shown the art of surrender, submission or devotion which is the true meaning of the word Islam.

In summary, Hindus are not Kafir and interfaith marriages are happening all over America especially in the Silicon Valley where people of all faiths are engaged day and night trying to give all of us a better future for our children and grandchildren.

Iftekhar Hai is a founder and President of United Muslims of America Interfaith Alliance. Read more of his views on www.umaia.net

Insulting Prophet Muhammad not 'free speech,' ECtHR rules
Garry Wills on "What the Qur'an Meant"
Why Iftekhar Hai, is running for Congress...