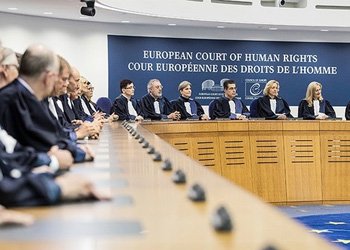 The European Court of Human Rights (ECtHR) ruled Thursday that an Austrian woman’s criminal conviction and fine for her statements accusing the Prophet Muhammad of pedophilia did not breach her right to free speech.

The decision by a seven-judge panel came as an Austrian national identified as E.S. by the court, had held seminars on Islam in 2008 and 2009 for the far-right Freedom Party (FPO) where she discussed the prophet’s marriage to his wife Aisha, a child at the time, and implied that he was a pedophile.

An Austrian court convicted her of disparaging religious doctrines in 2011 and fined her 480 euros (548 dollars), a judgment that was upheld on two appeals.

Stating that the court had found that “the applicant’s statements had been likely to arouse justified indignation in Muslims” and “amounted to a generalization without factual basis”, the Strasbourg-based ECtHR said that the woman’s comments could not be covered by the freedom of expression.

The court said it “found in particular that the domestic courts comprehensively assessed the wider context of the applicant’s statements and carefully balanced her right to freedom of expression with the right of others to have their religious feelings protected, and served the legitimate aim of preserving religious peace in Austria.”

ES’ statements “were not phrased in a neutral manner aimed at being an objective contribution to a public debate concerning child marriages,” the ECtHR held, adding that the moderate fine imposed on her could not be considered disproportionate.

The Austrian courts had drawn a distinction between pedophilia and child marriage, which was also a common practice historically in European ruling families.

The ECtHR also underlined that it classified the ‘impugned’ statements as “an abusive attack on the Prophet of Islam, which was capable of stirring up prejudice and putting at risk religious peace.”

It noted that the Austrian courts had held that ES was making value judgments partly based on untrue facts and without regard to the historical context.

Religious beliefs must be subject to criticism and denial, the ECHR observed, but when statements about religions went beyond critical denial and were likely to incite religious intolerance, states could take proportionate restrictive measures, the court said.

Austria, a country of 8.8 million people, has roughly 600,000 Muslim inhabitants. Lately, it has emerged as the leader of Islamophobia among European countries. The coalition government, an alliance of conservatives and the far right, came to power soon after Europe’s migration crisis on promises to prevent another influx and restrict benefits for new immigrants and refugees. In April, Austria’s far-right Chancellor Sebastian Kurz threatened to close one of the biggest mosques in Vienna and urged municipal authorities to be stricter regarding state subsidies for Muslim organizations in the city.

The Origin of Faith
Dr. Murad Wilfried Hofmann: Islam - A Rational Faith
Why Iftekhar Hai, is running for Congress...